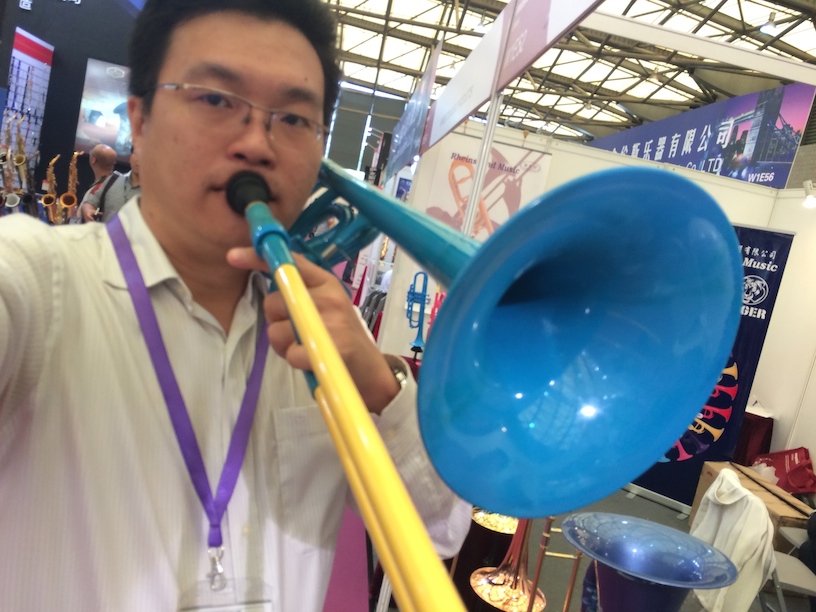 This is a prototype Bb/F plastic trombone, not for sale yet…

The conference got more exciting the following day and next, as more people started coming in. The second day was supposedly a trade visitor day, but quite a number of individuals signed up and came in anyway.

After a leg breaking record of walking all 10 remaining halls (did W1 and W2 1st day, but W3-W5, E1-E7 on 2nd day) I finally got a full picture of every possible niche one can play in this wild music industry. Even though not all brands came here to be represented, there’s at least some brands for each type of instrument, scores, electronics, etc. for everyone. People said it’s larger than the Frankfurt one, I thought it must be.

Some halls were more ridiculous than others. E4 had at any one time 50 drummers letting their hearts out, E7 had so many people looking for traditional Chinese instruments it could be mistaken as a local market. W5 was completely filled with smoke coming from smoke machines and you cannot look anywhere without staring directly at powerful stage lights. It was not that big that you’d get lost in such a show, but big enough that it was impossible to spend time with even just one company per segment.

Theft happens every year apparently. Some just outright steal, others daylight-rob you by engaging you to buy and then walk away without paying. We had one company who wanted every single item on our catalogue, claiming to be buying for the country’s libraries. Yeah right. Did not come back the next day, refused to pay cash, so good riddance. Not so good news for these guys though: 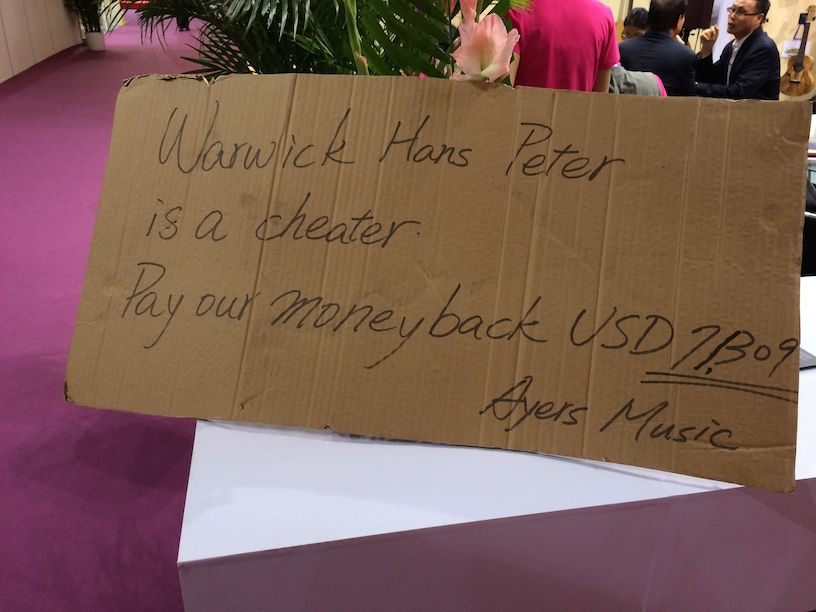 It was also very tiring because engaging with Chinese people require a heightened sense of self, an extraordinary amount of brain CPU for language, while also keeping sufficient power left for surveillance to prevent theft. On top of that, I was an extremely lousy shopkeeper – couldn’t rattle prices and discounts off my tongue or convert fluently between RMB and SGD – not to mention most people who walked into the booth weren’t really serious buyers; many did not know symphonic band.

So when we actually found real potential customers, the conversation carried on and on, sometimes for an hour, as we talked about everything from music education in China to the various stories of how each piece of work came about. And it might still end with, “thanks I’ll take a look at your catalogue when I’m home”. Recording is critical (now the highest on my todo list for coming year) as many teachers don’t read scores (they teach the band to match the recording) and so is localising the language.

Although the conference was supposed to end on Saturday 3pm, exhibitors starting tearing down from around noon. I was quite disappointed that I didn’t manage to get the bass trumpet I liked (someone beat me to it); now I’m hoping it’s a blessing in disguise. 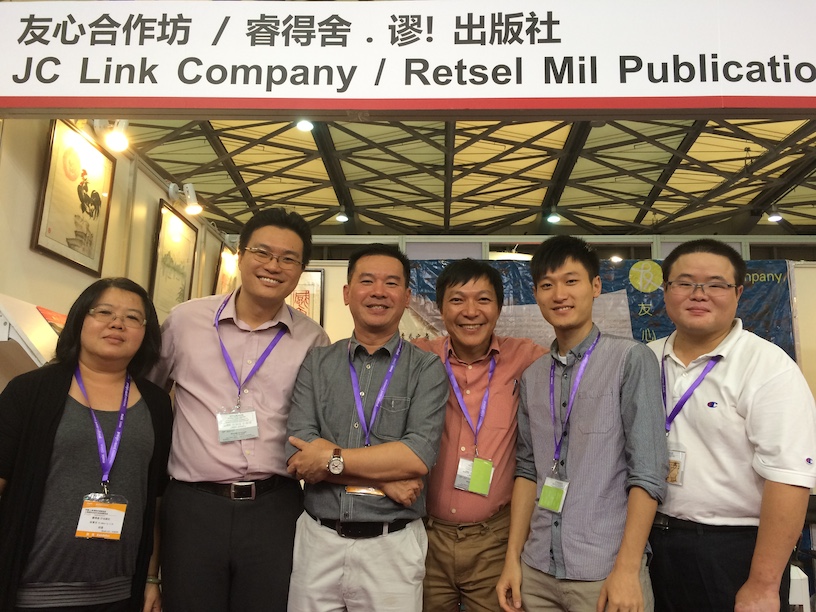 The evening was a surprising treat (or torture?) as Joseph 张老师, boss of JC Link whom we exhibited with, invited us to a concert he was guest conducting. It was a programme consisting of only Chinese works, played by a Shanghai concert band. After the presentation at the newly opened SSO (Shanghai Symphony Orchestra) Hall, we adjourned to supper where we were joined by our friend and luminary Chinese composer Chen Qian and some local band directors and leaders around the greater Shanghai area.

Hearing the struggles of their local band scene again confirmed some of the stories that were told to me in Singapore, but I also picked up a lot of new ideas and anecdotes.

Now, I can’t even start to imagine how large this industry can potentially be, and how under developed it is due to the language barrier and artificial walls being erected around them. Simple example: all these great YouTube clips had to be downloaded and uploaded to YouKu before locals have access to them. It’s no wonder many bands still sounded like local folk musical groups, lacking western concepts of ensemble: rhythm, harmony, balance etc.

On the surface, all is well. Every band do the same activities: concert and competition, like everyone else I know in Singapore and Malaysia. Every band has similar scores, crawl taobao or whatever they can get to find and copy scores. Every band has sufficient instrument, supplied by their excellent local manufacturers who copied effectively and priced competitively.

Unfortunately at this stage of the development of the industry, individual characters who operate the industry often feel insecure about their position, their network, their relevance. Thus the ritualistic patronising of important people that’s commonplace in thousands of years of Chinese culture permeate the band scene as well.

The characters at the supper were telling of their background and ambition, and pointed clearly where their bands will head to. Education, luckily, was still central to everything, and that gave an excellent angle for external players like us to provide relevant content. However, their struggles were more related to financial support, teaching resources and seeing a “path” to progress in music. Some also lack an entrepreneurial mindset to survive.

Ultimately, those with the best attitudes and constantly improving both their level of musicality as well as the operations of an arts group are the best type of partners we should look for to move the industry forward. 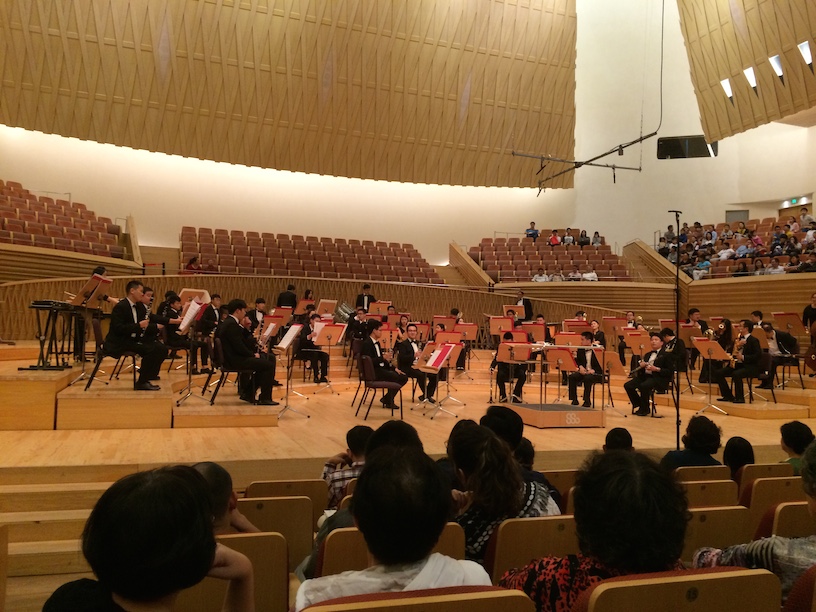 I feel that we underestimate how far we have come. Take “Those Years” 那些年, just an innocent piece of arrangement of the hundreds of pop music I arranged. I now walk into China meeting completely random band instructors claiming to know the piece very well. Many could rattle 新加坡爱乐管乐团 (Philwinds) off their tongue. But these could not be possible without a good recording of a good musical group playing a maybe passable arrangement of an impeccable melody written by a Japanese for a Taiwanese movie.

And we didn’t do this because that was the end goal. It was the attitude put in by everyone, starting from the commissioner and concert conceptualiser, to each performer, to each note being written and played, to the pickup of the mic of a live concert, even to the meticulous plagiarising of the video into the Chinese Internet without losing too much quality, and so on. Everyone was trying to solve a different problem, but all taking up their part, do their best, had a good time, but inadvertently created a mini-storm we did not even see.

However these pockets of energies are spread all over right now. Many individuals who rally their own “gang”, whether it’s in Singapore or other south east asian nations with advanced band scene, failed to see how working together and specialising in their delivery could have an impact to the world.

To build trust and specialisation, one first need a great platform: good governance, written agreements, business level relationships, and not verbal soap boxing, infinite credit terms, and most worrying of all, passion that can overwrite common sense. The entire industry, including all performers and audiences, needs to have a way of recognising quality, not just popularity. And finally, the market makers, the change agents, need to look bigger and wider and stop indulging with domestic politics.

Once we have that, toss in ample amounts of technology, social media, and channel partners who can make things happen in their respective markets (not just distribution), that’s when we will be poised to be a net cultural curator and exporter. America doesn’t care but Europe is watching closely, Latin America is realising, Japan is already reaching out.

A part 3 will follow on how I intend to achieve this and how I want you to help. Now to catch up on sleep thanks to red eye flights Zzz..