Good ideas deserves publicity, I say. And facebook flyers does work 😉 Check out Tagxe, pronounced tag-ci (rhymes with taxi of course), where you can share a cab with random people who wants to take a cab from one place to a number of places. This stolen picture from the site probably tells a better story: 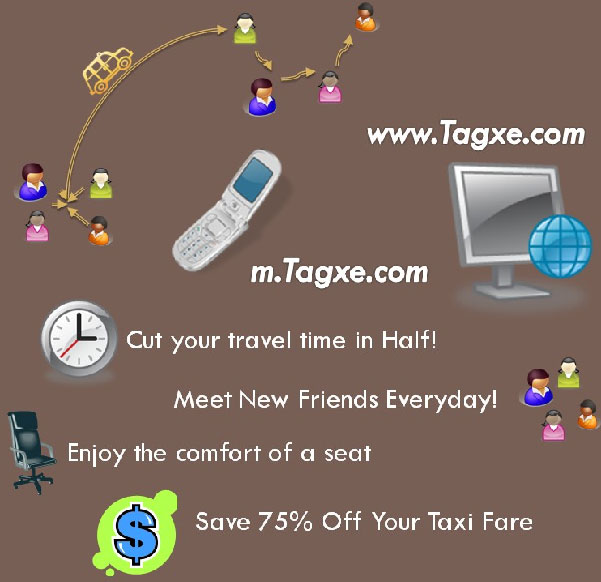 I’ve yet to try the service, but the FAQ and write-ups does show some fairly thorough thought by the writer of the application. There were two links to how to calculate cab fares that really caught my attention – I mean I went like “wow, there’s another way to split cab fare?” So far the way we split cab fare amongst friends has been based on either:

According to this article A mathematically fair way to split a taxi ride with multiple stops, it is suggested that the old fashion way is to split the trip evenly based on the total distance traveled by each person (as if 4 person took 4 cabs, for example). This somewhat echo one of the ways we do this, but as the first person gets off the car first, it’s usually the case that we have to estimate a lot based on geography, road distance, and the capability of taxi drivers for not taking the wrong road!!!

Then a somewhat interesting way was to do segmented splitting. Mathematically, that means that for N people when person A gets out and the meter reads a, he or she should contribute a/N. When B gets out, (the meter reads b) the contribution should be a/N (for the first segment) + (b – a)/(N – 1) (for the second segment), and so on. Intuitively, in a 4 person cab share, the first person pays 1/4 of whatever the meter says. The second person then pay 1/3 of the second segment (so as if the meter went back to zero with 3 person in the car). The cash is passed on so that the last person who leaves the car hands it to the cab driver.

Although it has been considered that going down to the cents will be hard, it is still possible that with up and coming ubiquity of micro-payments with mobiles, as well as in cab kiosk based services like Mr. Taxi being smarter, one can imagine a group presetting the cab splitting algorithm upfront, scans their phone, and let the taxi system do the calculation. This will be damn cool la!

On the second article from WSJ, How to Split a Shared Cab Ride? Very Carefully, Say Economists it goes even deeper. The first method is identical as the one discussed above. It goes on to propose the following other possibilities:

Then I thought – hey, isn’t this maxing out at half nobel prize winning idea the same as my original gut-feel-algorithm of just paying about half of your usual cab fare? This can’t be a coincidence coz I’ve never done any calculations around it…

More importantly, this draws us to a bigger issue of “should we share”? In the next generation data centers that SCS is trying to build, we ask ourselves: how much should we virtualize, and if so how? Take hardware virtualization for example: How do we decide if an application should be sitting on a Virtual Machine or a on its own box? Suppose we run some sort of intelligent provisioning system that has a rule base policy engine to decide how much to provision: what will be the rule that will govern whether it would be a VM deployment or a bare metal deployment?

And suppose we share, how should we share? The idea of the upcoming Grid CFC from IDA is that we have to turn computing resources into a utility based model. Service operators will be expected to charge by utilization. But it’s not possible to measure down to the CPU cycle / storage bit level (this is not just High Performance Computing of folding one protein of sorts, but the SAPs and Oracles perhaps sharing one server in 2 VMs) just like it’s not possible to split the fare based on how many rotation the tires of the taxi made to bring you to your house. So we will end up with ballparks like when application one started & ended, how much disk space it consumed / database activities occurred etc. If two apps share a box, one runs half a day and goes away, the other runs the whole day – isn’t this back to our cab share problem?