As the full rehearsals draw to a close, the exhausted students hurried to bus stops and a snake of cars full of anxious parents, each too weary to wear a smile on their face. I thought, it’s time to share some of the underlying details of the work.

On 17, 18, and 19 May 2019, 500 students from 18 CCAs will be putting together a musical, directed by their coveted drama teacher Mr Yang Wenzhong. Jay and I wrote the orchestral music for it while Wee-Hsin took the baton. As Jay and I each wrote around half the music, we thought early on that we need a musical topic that would connect all the pieces, so that it doesn’t become a 3 hours long medley.

We wanted it to:

2) be related to the school bell

3) be related to the word Hwa Chong

4) be reusable in many permutations

And we came up with this: 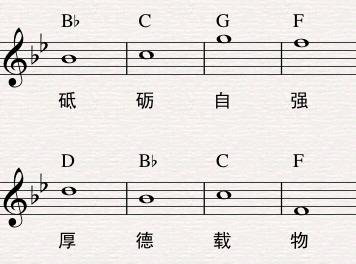 Echoing the 4 x 2 structure of the slogan, we picked these 8 notes.

The first thing that came to me was how the two Bb C sounds like our Singlish way of saying Hwa Chong, or somewhat close to the Chinese way of saying 华中 or 华初.

The second 4 notes is traditionally a symbol of chimes in clock towers.

Without specifying the duration of each note, it allowed us to create melodic passages: 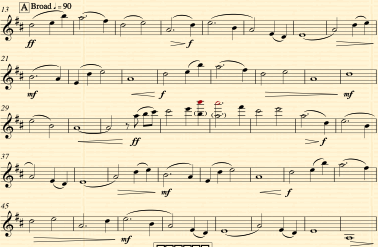 Or used harmonically (example from 1st and 2nd trumpets)

But what crossed my mind during one of the rehearsal is how much this figure described the life of a Hwachongian.

You start with a whole tone (B flat to C), representing the initial part of coming into the school, a wholesome growth from primary to secondary.

With no further warning, you’re put into a fifth ascend. You shoot high to G, still reasonable and with good reference to the C, but in no way easy. Reminds me of my Prelims in JC.

And you come down a whole tone to relax on a dominant (G to F), as you’ve long been stretched to be the best, probably getting your straight As.

And as your start your post-school life, life is good because of the good education you received, represented by the mediant note of the scale (D).

Knowing your privileged position, you return to your roots (D to B flat), and help others do their first whole tone (Bb to C), before retiring into the other dominant (F).

砥砺自强, 自强不息, a core tenant of the school, can be heard as Sopranos ascend to the fifth, to achieve greatness. The power of the words 自强, when sung this way (G F), rose from the Hwa Chong sounding whole tone (B flat C).

厚德载物, 己立立人, 己达达人, can be found in the structure of the clock chime figure, where the mediant and dominant (D, F) carries the Hwa Chong sounding whole tone (B flat C) in between.

In the shortest possible statement, similar to the slogan, the motive attempts to capture the spirit of 100 years of educators, and the stories of 100 batches of students.

All the best to the first show today!