Every time people ask me if I’ve been to Indonesia the answer has been “Bali” (which feels like a different country), but now I think I can say “Yes” and share an authoritative experience.

Cilegon is one of the most religious corners of Java. In most countries that I’m exposed to thus far, mosques only broadcast call to prayers, but here we get the entire prayer session broadcasted. I was told the locals are generally pious muslims. Churches are banned here apparently (I haven’t check), and the nearest church is in Serang which is an hour away.

It’s a coincident that the western tip of Sumatra – Aceh – is also a deeply religious community, except people are better employed here than Aceh. For being away from Indonesia’s center of gravity, Cilegon feels like Kedah in many ways, huge padi fields, township with beautiful mosques, and heavy industries. Air is certainly poluted by excessive burning in certain factories, but the food and people are still a pleasant embodiment of Indonesian mannerisms.

Jakarta on the other hand feels no different from KL, but 10 times larger. Beyond the comforts of any big cities, the one big thing it should really solve for itself, is traffic. Like omg please solve the traffic please. There’s like 10 times less major artery roads than KL. Sorry to say, but some houses just have to give way as long as the relocation is beneficial to everyone affected.

Notable to this first experience was Es Teler! It’s the local version of shaved ice dessert. It usually consist of avocado, jackfruit and coconut meat, and in one instance with soursop, served in coconut milk base shaved ice not very different from Ais Kacang. M felt that the vegetables here were laced with insecticide but I thought they were fine, just a different way of cooking perhaps. However, some vegetables are still an acquired taste, like the tapioca leafs (which I felt bleh).

Perhaps I had wrong stereotypes earlier, but I’m very happy with the comforts of life here, at least between the 2 cities thus far. 3G is better than landline (obvious to me, surprising to some), malay keywords overlap is high (feels like jap kanji and chinese), but the day to day words are still different and will require some thorough immerssion to get right. It’s also quite odd to get comfortable being addressed as Pak Jiin Joo after a few days. It’s a Pak Pak world 🙂 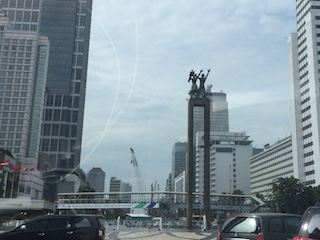 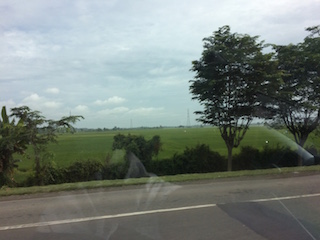 Padi fields along the road

2015 is also turning out to be work travel year for me. 5 days / 4 nights is probably the limit for me mentally. I don’t even know how long I will need to recover, but it seems like I don’t have more than a few hours of extra sleep anyway. Good thing I didn’t fall sick (yet).

Nevertheless, this was one of the hardest work trips away from home. As we travel from Cilegon to Jakarta, my heart was racing through the various scenarios that could have happened at home. How is YC coping? How is baby copy? How are the various groups I’m involved with coping?

They say business travel is hard, and people are better renumerated for it. But just based on my small sample of friends and work contacts, it seems like the norm in Singapore is to travel, and that usually means having to leave your family for a short period of time, with no extra perks.

I made a friend here who told me about his previous job at remote site in Indonesia. 4 months at work, 3 days at home. Repeat. That was the deal. Money was good, but not the communications in the middle of a jungle. He paid Rp. 5000 every time he needs to get into the bowl of the excavator and be elevated into midair, in order to call his wife and daughters.

If there was no travel, Singapore can hardly be a base for any meaningful international business. Certainly not the kinds of technology business that we are building now. When one specialises into a very high value niche, the corresponding customer is usually far and few as well, and mostly spread where the resources of the world are.

This time, I sought out how families cope with short term separation, but gained little new insights. Poeple who said they cope well does not always have the same testimonial from the wife and family (or husband too, just that for this trip it has been consistently male). I’m only glad that YC is willing to learn this together with me, because, she will eventually have to work travel professionally too.

How do you cope with work travel?